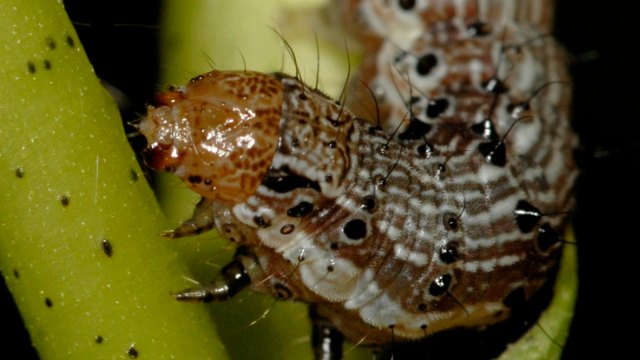 The caterpillar pest Helicoverpa zea (also known as cotton bollworm and corn earworm) has evolved resistance to four Bt proteins produced by biotech crops. ALEX YELICH/UA DEPARTMENT OF ENTOMOLOGYResistance to insecticides produced by genetically modified crops is on the rise, according to a study published Wednesday (October 11) in Nature Biotechnology.

For more than 20 years, farmers across the globe have been planting crops, including corn, cotton, and soybeans, that have been genetically modified to express insecticide genes from the bacterium Bacillus thuringiensis (Bt). When susceptible pests munch on these “Bt crops,” they get poisoned. But insects that have developed resistance to Bt toxins can live on undeterred, and that resistance is growing.

“When Bt crops were first introduced in 1996, no one knew how quickly the pests would adapt,” says study coauthor Bruce Tabashnik, head of the University of Arizona (UA) department of entomology, in a release...

As of 2005, there were only three reports of insect resistance that “substantially reduced the efficacy of the Bt crops in the field,” according to the release. As of 2016, there were 16 such reports, and in those cases, it took an average of five years for resistance to develop, the study reports.

Tabashnik and his UA colleague Yves Carrière reviewed the scientific literature about pest resistance to Bt insecticides and looked at 36 “cases,” where each case is a report on the response of one insect to one Bt toxin in one country during the first two decades of Bt-producing crop use (from 1996 to 2016). The cases include “15 pest species in 10 countries on every continent except Antarctica,” according to the release.

In addition to the 16 cases where pest resistance significantly hurt crop performance, there were also three cases of “early warning of resistance,” in which statistics indicate that the pests are resistant but the damage is still small. And in what Tabashnik calls “a silver lining,” he found 17 cases in which insects were still susceptible to the insecticide-producing crops.

Carrière notes in the release that refuges—non-Bt crops near the genetically modified ones—helped delay the development of resistance. Refuges, unlike the Bt crops, do not select for resistant insects and are intended to decrease the chances of two resistant pests mating and producing resistant offspring.

“There is a strong pressure for pests to evolve resistance to whatever control pressure we put on them, whether part of a GM strategy or as part of conventional chemical control,” Anne Glover, president-elect of the Royal Society of Edinburgh, tells The Daily Mail.

“This research is valuable in that it points to a variety of strategies that can be used to delay resistance. More research like this will help us to move to agricultural practices which use integrated pest management with a reduction in chemical use which benefits farm workers, consumers, and the environment.”