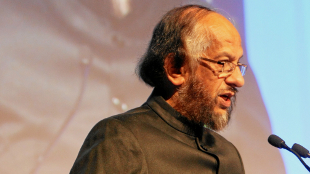 Rajendra Pachauri, IPCC chairman, at the World Economic Forum in Davos, Switzerland, in 2008WIKIMEDIA, WORLD ECONOMIC FORUMNot everyone in the scientific and environmental communities agrees with every single point and recommendation laid out by the Intergovernmental Panel on Climate Change (IPCC) when it releases its sprawling assessments of the state of our warming globe every six years or so. Such was the case last month when the IPCC released the first installment of its fifth assessment on climate change. But IPCC watchers tend to agree on a couple of points: 1) The panel, with hundreds of authors poring over thousands of peer-reviewed documents and millions of gigabytes of data, is the most robust and independent framework for truly characterizing the state of the climate, and 2) Exactly how that assessment takes shape is pretty mysterious.

Because the IPCC’s plenary sessions are conducted behind closed doors with deliberations kept...

Sociologists have studied the IPCC in the past, but two recent papers on how interactions among panel members shaped the group’s assessments have relied upon the written reports themselves, plus after-the-fact interviews with participants. The planned study would involve recording interactions in meetings and interviewing panel members on the spot. “Most people on the outside have no idea what the IPCC does,” Naomi Oreskes, a Harvard science historian and member of the prospective study team, told Nature. Such a study could help demystify the process for the public and other scientists, uncover any biases or other social dynamics at play in the deliberations, and help to streamline and maximize the efficiency of the process.