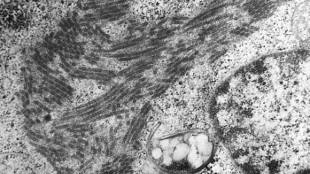 CDC PUBLIC HEALTH IMAGE LIBRARYAs health officials in West Africa continue their efforts to contain the region’s deadly Ebola outbreak, the World Health Organization (WHO) on Thursday (July 31) announced a $100 million response plan to supply the affected countries of Guinea, Liberia, and Sierra Leone with needed resources, including “several hundred more personnel . . . to supplement overstretched treatment facilities,” according to a WHO statement. That same day, the US Centers for Disease Control and Prevention (CDC) announced that it would be sending around 50 of its experts to West Africa to assist in outbreak containment efforts.

Since March, there have been more than 1,300 confirmed and suspected cases of Ebola virus disease reported, including 729 deaths.

“Ebola is worsening in West Africa,” CDC Director Thomas Frieden told reporters on Thursday. Containing the outbreak, he added, is “not going to be quick, it’s not...

Frieden noted that “Ebola poses little risk to the U.S. general population.” As a precautionary measure, his agency has issued a Level 3 travel warning, advising travelers not to visit the three countries at the center of the outbreak unless absolutely necessary.

There is no vaccine to prevent Ebola virus disease, and no specific treatments for it. Tekmira Pharmaceuticals’s RNA interference (RNAi)-based drug, “TKM-Ebola,” is the only candidate to have reached clinical trials, but the US Food and Drug Administration (FDA) put the firm’s Phase 1 trial on hold in early July, pending additional safety data. In a July 21 press release, Tekmira said it anticipates moving forward with the trial by the fourth quarter of this year.

Meanwhile, federal officials in the U.S. are working to fast-track the development of an Ebola vaccine, The Washington Post reported. The hope is to begin clinical trials in September.

“We’re trying to go as quickly as we can given the emerging nature of the situation,” Anthony Fauci, director of the National Institute of Allergy and Infectious Diseases, told the Post.