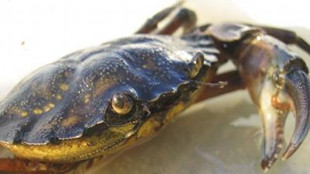 A European green crab.CATHERINE MATASSA/NORTHEASTERN UNIVERSITYThe green crab, an invasive species from Europe, threatens many native species in the United States, consuming shellfish, algae, and crustaceans. But its aggression has an unexpected silver lining. The hated species is indirectly preventing erosion in Cape Cod salt marshes by driving down the population of a native crab species that has multiplied out of control, according to a paper published in the journal Ecology last month (March 29).

Green crabs do not ordinarily live in marshes, preferring rocky shorelines. But invasive green crabs have begun to colonize unhealthy marshes, where they can take advantage of the extensive network of burrows...

A survey of 10 Cape Cod marshes and found that the density of green crabs was associated with recovery in damaged marshes.

Mark Bertness, an ecologist at Brown University and one of the study’s authors, told ScienceNOW that he hoped the study would make people think harder before making blanket statements about needing to eradicate nonnative species. But Edwin Grosholz, an ecologist at University of California, Davis, who did not participate in the study, said that the green crab’s rehabilitation is far from complete. “It may have a positive effect in New England,” he told ScienceNOW. “It’s track record elsewhere is quite different.”