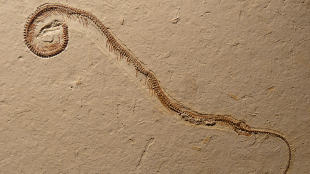 IMAGE - DAVID MARTILL, UNIVERSITY OF PORTSMOUTHLast month (July 23), researchers reported finding what some are calling the missing evolutionary link between lizards and snakes—a fossil that appeared to be an ancestral snake species that had four rudimentary legs. But now that same fossil, which was originally unearthed from a geological formation in Brazil and was rediscovered in a German museum, has sparked an investigation by Brazilian officials seeking to trace the find’s provenance. “We will formalize a request for investigation with the Brazilian Federal Police, in order to ascertain how this fossil specimen left Brazil,” Felipe Chaves, head of the fossil division of the Brazilian National Department of Mineral Production, told Nature. “We know some details that merit being investigated.”

Paleobiologist David Martill from the University of Portsmouth in the U.K. found the four-legged snake fossil in Solnhofen, Germany’s Bürgermeister Müller Museum in 2012; the relic...

The case points up a lingering issue involving the legality of myriad fossils from across the globe that scientists study every day. Martill, for one, says that researchers should be left out of the legal messes that these fossils may stir up. “It is a bit distracting if scientists have to mess about with the legality of fossils before they study them,” he told Nature. “I see thousands of fossils every year from all over the planet. I am not going to write to the governments of all those countries just to check each and every fossil.”

But others in the field maintain that researchers studying fossils do have a responsibility to check on the legality of their finds. “From what I have seen, [Martill and his colleagues] should not have published the paper,” James Clark, a paleontologist at the George Washington University in Washington, DC, told Nature.

The journals that publish paleontological research are similarly split on the issue. Science, which published Martill’s four-legged snake paper, does not specifically require that fossils at the heart of such papers are obtained legally. Neither does Nature. But Cretaceous Research states that fossils of uncertain provenance will not be accepted for publication, Nature reported.

Martill added that all of the legal wrangling can be distracting to researchers trying to solve millennia-old evolutionary mysteries. “It is my feeling that the lawyers and embassies should fight it out amongst themselves and just let the scientists get on with plying their trade,” he told Nature.  “I don't care a jot where the specimen is . . . so long as it is in a safe and accessible place for future scientists to research it.”