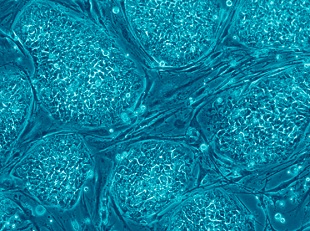 Human embryonic stem cellsWIKIMEDIA, NISSIM BENVENISTYAlthough induced pluripotent stem cells (iPSCs) have been approved in clinical trials for a handful of diseases, some have expressed concern that patients who receive transplants of iPSC-derived cells might have an increased risk of cancer. But the results of a study published last week (February 19) in Nature Communications suggest that there’s little to make these cells more likely than normal cells to develop into tumors.

“One of the greatest concerns with iPS cells—and this isn’t entirely based in science—is that they’re going to acquire mutations and when we put them into people, the cells are going to go awry and in the worst cases, turn into cancer,” study coauthor Jeanne Loring told STAT News. “But when we looked for mutations known to be associated with cancer, we just didn’t find them.”

To assess the risk of harmful mutations arising from...

The team found that although the iPSCs contained some genetic sequences that were not present in parent fibroblasts, the number of differences between stem and parent cells was small, and varied little by reprogramming method. The analysis also showed that the mutations were unlikely to be harmful.

“Our own cells are very diverse in the same way these iPS cells are diverse,” Loring told STAT News. “Mutation sounds really scary, but what we found is extremely normal.”