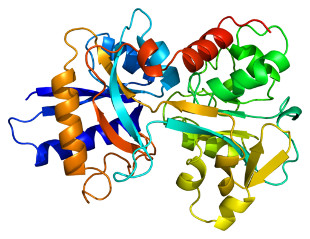 A model showing the structure of the human transferrin proteinWIKIMEDIA, EMWDamaging toxins and antibody-epitope interactions are frequently the battlegrounds of host-pathogen arms races, but a new study suggests a role for a different, so-called “nutritional” immune system. In primates, the iron-carrying protein transferrin likely evolved to inhibit meningitis-causing bacteria from scavenging iron, an essential but limited nutrient, researchers reported last week (December 11) in Science.

Matthew Barber and Nels Elde from the University of Utah School of Medicine compared transferrin-encoding genes from 21 primate species, and found remarkable variation at sites known to interact with a bacterial transferrin binding protein, TbpA. Two bacterial species, Haemophilus influenzae and Neisseria meningitidis, are among the main causes of meningitis, a life-threatening inflammation of the membranes surround the brain and spinal cord.

“Transferrin was acting as if it was an immunity gene,” Elde told National Geographic’s Not Exactly Rocket...

A further investigation of transferrin sequence differences among humans revealed a variant that was unable to interact with the TbpA protein from H. influenzae. In different ethnic groups, this sequence was present in 6 percent to 25 percent of people, showing a snapshot of transferrin evolution, with the pathogen-evading version changing in frequency depending on the environment.

In light of rising antibiotic resistance, “people have been toying with providing patients with more transferrin” to fight infections, Elde told Not Exactly Rocket Science. “We could reach into the genetic medicine cabinet and use solutions that we’ve naturally come up with through millions of years of evolution.”