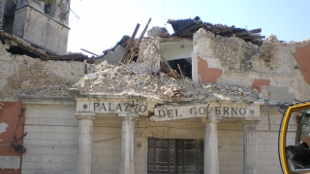 A goverment office In L'Aquila damaged by the 2009 earthquake - Wikimedia, TheWiz83After more than a year in court, an Italian judge has ruled that seven people are guilty of manslaughter for issuing falsely reassuring statements to residents of L'Aquila just days before an earthquake killed more than 300 people in the central Italian town. The seven—which include a volcanologist, a geophysicist, a seismologist, and a professor of seismic engineering, as well as 2 engineers and a government official—were sentenced to 6 years in prison.

On March 31, 2009, just 6 days before the deadly quake struck, the seven convicted people had all participated in a meeting of Italy's National Commission for the Forecast and Prevention of Major Risks, which was held in L'Aquila, as tremors rumbled beneath the town. According to prosecutors in the case, statements made during that meeting indicated that L'Aquila was in no danger of...

"It's incredible that scientists trying to do their job under the direction of a government agency have been convicted for criminal manslaughter," University of Southern California earth scientist Thomas Jordan told ScienceInsider. "We know that the system for communicating risk before the L'Aquila earthquake was flawed, but this verdict will cast a pall over any attempt to improve it. I'm afraid that many scientists are learning to keep their mouths shut."

Lawyers of the seven will appeal the sentence, a process that could take up to 6 years.