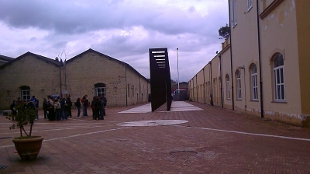 A courtyard at the Città della Scienza, photographed before fire destroyed the facilityWIKIMEDIA, PINOTTO992On Monday (March 4), fire tore through the Città della Scienza (City of Science) facility in Naples, Italy. By the time firefighting crews had finished battling the blaze several hours later, the complex, which comprised an interactive science museum, educational facilities, and conference space, was reduced to cinders. In all, 10,000-12,000 square meters (about 108,000-130,000 square feet) of the facility were burnt to the ground, with only one building—which is used to hold events—surviving the flames, according to Italy’s ANSA national press service.

The Città della Scienza attracted about 350,000 visitors per year to Bagnoli, an industrial area of Naples that previously contained a steel manufacturing company. About 160 people worked at the facility, but as the museum is closed on Mondays, no one was injured in the fire.

Though the cause of the fire is unknown, Naples Mayor Luigi de Magistris suggested that foul play may be involved. “It seems to me that a criminal hand is behind the flames,” he told the Italian news agency ANSA, but gave no more specifics before promising an investigation by the city’s magistrates.

Update (March 7, 2013): National and local governments have agreed on a plan to rebuild the Città della Scienza, according to ScienceInsider, which cited an article in Italian newspaper La Repubblica. A consortium comprising the Italian Ministry of Economic Development, Infrastructure and Transport, the Ministry for Territorial Cohesion, the local government, and the mayor of Naples have put together a €20 million (about USD $26 million) plan to reconstruct the destroyed facility.