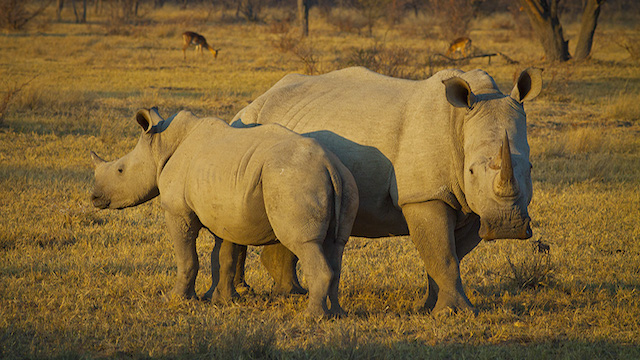 Illegal poaching has wiped out northern white rhino populations. Only three are left in the wild: a 40-year-old male and two younger females. The remaining animals are currently housed at the Ol Pejeta Conservancy in Kenya, where they are protected by armed guards. Although southern white rhinos (Ceratotherium simum) were also once endangered, conservation efforts boosted their population back to over 20,000 animals.

Because age and fertility issues make it impossible for the remaining northern whites to breed naturally, scientists hope to create new offspring in test tubes. Before that happens, researchers plan to test the procedure on southern white rhinos first.

According to the Telegraph, Dvur Králové Zoo in the Czech Republic, which owns the three remaining northern white rhinos, is...

Those eggs are now at a clinic in Italy that specializes in assisted reproduction for animals. There, scientists have fertilized the eggs with southern white sperm and cryogenically frozen them. They will eventually implant these back into rhinos.

Researchers plan to extract eggs from the northern white rhinos in Kenya later this year. Once those eggs are fertilized, scientists will plant the embryos into surrogate southern white mothers.

If this process is unsuccessful, scientists will try creating hybrid southern and north white rhinos instead.

“Our great hope is to go to Africa to collect eggs from these last two northern white females and the fertilise them so we would have a pure bred northern white rhino embryo,” Robert Hermes of the Leibniz Institute for Zoo and Wildlife Research in Germany tells the BBC. “But the last northern whites could die any time: anything could happen to them, then all their genetics would be lost. If we have at least 50 percent of this preserved in a hybrid—we would preserve at least half for future generations.”