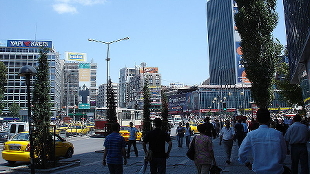 Kizilay Square in Ankara, TurkeyWIKIMEDIA, AHMETANA Turkish chemical engineer who has been in jail in Ankara, Turkey, for a year for allegedly supporting the 1997 overthrow of the country’s Islamist-led government attempted to commit suicide last week, reported ScienceInsider. He was rushed to hospital and is no longer in danger.

Kemal Gürüz, who served as president of the Turkish Council of Higher Education between 1997 and 2003, actively opposed the influence of political Islam in education. He was indicted in June 2012 as part of the current Islamist-led government’s inquiry into the role of the military in the breakup of the previous Islamist regime, a spokesperson for the International Human Rights Network of Academies and Scholarly Societies told ScienceInsider, and has been incarcerated in Ankara’s Sincan prison ever since.

Gürüz denies any responsibility, and his case has never been heard in court, said his friend...

Sengor believes that Gürüz was jailed as an act of revenge for his activism against Islamist influence in education and his dismissal of a university rector named Besir Atalay, who has since become Turkey’s deputy prime minister.

“Turkey has come to the front row of countries that harass and imprison scientists in the last few years,” Eugene Chudnovsky, cochair of the New York City-based Committee of Concerned Scientists (CCS), which is campaigning for Gürüz’s release, told ScienceInsider.  Indeed, there are at least five other leading scientists and intellectuals imprisoned on dubious charges, according to CCS.