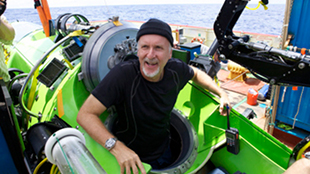 Cameron gets out of his submersible following his dive last year.PHOTO BY MARK THIESSEN/NATIONAL GEOGRAPHICA year ago this week, movie director James Cameron took a solo trip down into the Mariana Trench. Now, he giving away his submersible, the Deepsea Challenger, to the Woods Hole Oceanographic Institution in Massachusetts. The research institute will initially use some of the submersible’s parts on its own diving vessels and will evaluate whether Cameron’s vessel will dive again, BBC News reported.

Cameron said the decision was the submersible’s best hope of living out a useful life. He told the BBC, "My hope is with the sub's home now at Woods Hole, there will be a residential team in place—and they will have the knowledge of how to bring that sub back online."

Cameron had the submersible built using $10 million of his own money, according to The New York Times....

He told the BBC that he was surprised by how little life he saw on his first trip. “We expected there to be a big biomass in the sediment . . . but I expected more macrofauna, the things crawling around on the bottom. I had never seen a seafloor as devoid of macrofauna as the Challenger Deep.”

National Geographic is making a film using footage recorded on Cameron’s trip that is due out this year. The Deepsea Challenger should be delivered to Woods Hole in June.