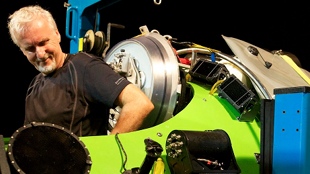 After directing two films about sunken sea vessels—Titanic and The Abyss—you might think that James Cameron would fear ocean travel. But instead, he took the deepest possible plunge himself. Yesterday (March 25) at around 5 pm EST, Cameron tweeted from the sea floor, “Just arrived at the ocean's deepest pt. Hitting bottom never felt so good.”

Cameron and his team of engineers worked in secret for years to construct a vessel able to withstand the pressure at the sea’s deepest point, the Challenger Deep in the Mariana Trench at 6.8 miles down. The vessel—which Cameron dubbed a “vertical torpedo” that sits upright to shoot down to the seafloor—can only hold one person, making his dive the first one-man mission to the Trench’s depths.

He planned to spend a full 6 hours on the seafloor, collecting samples and filming the trip in 3D for...

"I didn't feel like I got to a place where I could take interesting geology samples or found anything interesting biologically,” Cameron said after he resurfaced, according to National Geographic. “I had this idea that life would adapt to the deep...but I don't think we're seeing that."

Unfortunately, because of a hydraulics leak and loss of thrusters, he was able to collect  only a partial sediment core sample. The malfunction also forced him to resurface after less than 3 hours—but he plans to do better next time around.

"Next dive," he said. "Gotta leave something for the next one."