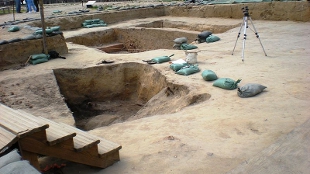 Archeological dig at Jamestowne Historical National ParkWIKIMEDIA, SARAH STIERCHThe story of Virginia’s Jamestown Colony, the oldest permanent English colony in the Americas, is a classic cautionary tale of the perils of settling new and unfamiliar lands. Starvation, disease, and hostile Native Americans plagued the dozens of settlers that landed at Jamestown in 1607. And now, one of the most grisly tales that was spun about the deprivations of those early colonists has been supported by forensic evidence recently unearthed at the site of the settlement: Jamestown’s earliest residents engaged in cannibalism when the winter of 1609 drove them to the brink of starvation.

Researchers announced yesterday (May 1) that they had unearthed the remains of a 14-year-old girl whose skeleton bore the marks of butchering at the hands of her fellow colonists. “The chops to the forehead are very tentative, very incomplete,” Smithsonian forensic anthropologist Douglas Owsley told...

Owsley and his team analyzed the girl’s bones, which were found in a trash pit with butchered horse and dog skeletons, and determined that her brain, tongue, cheeks and leg muscles were eaten, likely in the harsh winter of 1609, when a punishing drought, hostile relations with Native American, and the failure of a resupply ship to reach Jamestown drove the colonists to cannibalism.

The findings support written descriptions of the events of 1609 that have survived from Jamestown’s residents. “Historians have gone back and forth on whether this sort of thing really happened there,” Owsley said. “Given these bones in a trash pit, all cut and chopped up, it’s clear that this body was dismembered for consumption.”