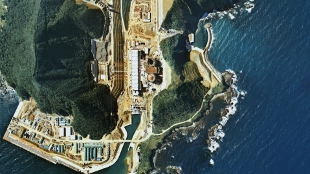 Japan's Oi Nuclear Plant, which houses the country's only still-running reactors, sits atop an inactive fault.WIKIMEDIA, NATIONAL AND IMAGE INFORMATION (COLOR AERIAL PHOTOGRAPHS), MINISTRY OF LAND, INFRASTRUCTURE, TRANSPORT AND TOURISMAfter a devastating earthquake and tsunami hit Japan in March 2011, damaging and releasing radiation from the Fukushima Daiichi power plant, about 50 of the country’s nuclear reactors have been waiting for the green light to power back up. Though plans to reboot Japan’s slumbering nuclear reactors have been progressing since the disaster, a panel of geophysicists working for the Nuclear Regulation Authority (NRA) is now warning that some of the plants that house them are still at risk of damage by earthquakes.

Initial reports issued by the NRA panel last month indicate that at least some of the reactors sit above active seismic faults that put the facilities in danger should earthquakes strike again. For example, the team...

But some in Japan, including seismologists and a nuclear industry eager to restore the country’s nuclear energy capacity, are questioning the NRA panel’s preliminary findings. Koji Okumura, a paleoseismologist at Hiroshima University who advised the Japanese government on rebooting the country’s nuclear infrastructure as part of the Nuclear Safety Commission until that body was replaced by the NRA in September 2012, told Nature that the NRA panel was being too conservative in their risk assessments. “They are being overly cautious just to avoid criticism,” Okumura said. “They think they’re like Superman, coming in to save us from the bad guys.”

The NRA will evaluate the panel’s report, and if it endorses findings that indicate an active fault line exists underneath a plant, the reactors housed there will not be allowed to operate.