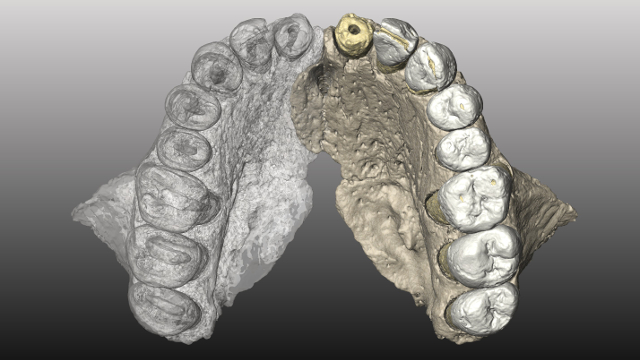 A virtual reconstruction of the upper jaw of an early modern human, based on a partial fossilized jawbone found in Israel. GERHARD WEBER, UNIVERSITY OF VIENNAHuman remains found in a collapsed cave in Israel may change the commonly-accepted timeline for human migration out of Africa, pushing that milestone back by 55,000 years or more, according to a study published yesterday (January 25) in Science. The fossil, a partial jawbone, was unearthed in 2002 and analyzed by researchers at Tel Aviv University and other institutions around the world, who report that it belonged to an early modern human.

The jawbone “provides the clearest evidence yet that our ancestors first migrated out of Africa much earlier than we previously believed,” study coauthor Rolf Quam of Binghamton University in New York tells Science News.

Jean-Jacques Hublin of the Max Planck Institute for Evolutionary Anthropology in Germany who was not involved in the study, tells the New York Times that while the jawbone appears more similar to early modern humans than to Neanderthals, its bearer may not have closely resembled today’s humans. It’s possible the remains belong not to ancestors of modern Homo sapiens, but to a population that later died off, he adds.