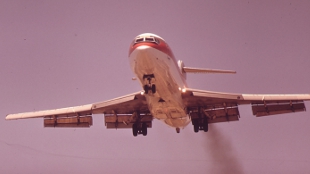 WIKIMEDIA, BOB SMITH, EPAJet lag may be as disorienting to the microbes that inhabit the human intestinal tract as it is to the human, according to a new study of how disturbances to the circadian clock can impact the gut microbiome. Researchers in Israel have shown, in both mice and humans, that the bacterial assemblages inhabiting the digestive tract are vulnerable to the ravages of circadian rhythm alterations. And when the gut microbiome is disrupted, they found, a suite of maladies, including glucose intolerance and obesity, result.

Immunologist Eran Elinav of the Weizmann Institute of Science in Rehovot led a team of researchers that subjected mice to a disruption in their sleep cycle that mimicked jet lag from an 8-hour time difference in humans and surveyed changes to their gut microbes. The researchers, who published their work in Cell on Wednesday (October 15), also studied the microbiota of...

The human microbiomes that changed in response to jet lag did, however, return to normal two weeks after their flight. But frequent air travel or other activities that disrupt sleep/wake cycles, such as shift work, could make the disruptions, and their resultant health problems, chronic.