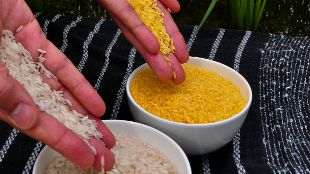 WIKIMEDIA, INTERNATIONAL RICE RESEARCH INSTITUTEA Massachusetts judge has ruled in favor of a journal’s decision to retract a paper on a type of genetically modified rice. The study’s lead author, Guangwen Tang of Tufts University, previously asked for an injuction against the publisher, who yanked the study from the American Journal of Clinical Nutrition because the researchers did not comply with certain ethical guidelines.

According to the retraction notice, posted online July 29, “The authors are unable to provide sufficient evidence that the study had been reviewed and approved by a local ethics committee in China in a manner fully consistent with NIH [National Institutes of Health] guidelines.”

Tang and her colleagues tested how well a genetically modified rice, called golden rice, could provide children with β-carotene. They found that the rice was just as good as a β-carotene supplement and better than spinach.

According to a Tufts...

The Clerk of the Massachusetts Superior Court last month (July 17) posted a notice, which Retraction Watch subsequently shared, about Tang’s denied request. “The requested order would be an unconstitutional Prior restraint on speech as well as an unconstitutional order compelling speech.”

According to ScienceInsider, “Adrian Dubock, executive secretary of the Golden Rice Humanitarian Board in Switzerland disputes that there were any ethical irregularities and argues that the retraction is not warranted.”