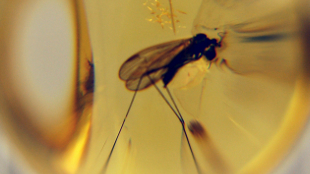 A gnat trapped in amber at Frakfurt's Senckenberg MuseumWIKIMEDIA, EVAKIt looks like Jurassic Park won’t be happening any time soon. Researchers at Manchester University in the U.K. have thrown a huge bucket of cold water on any hopes of actually recovering dinosaur DNA from insects embedded in millennia-old tree sap, which any science fiction fan could attest is the necessary first step toward cloning dinosaurs that would walk the Earth again.

A team led by biologist David Penney used next-generation sequencing to search for ancient DNA in two 10,000-year-old stingless bees that were preserved in copal, tree resin that hasn’t yet fully hardened into amber, found in Colombia. The researchers did not recover any viable ancient DNA,  and reported their results this week (September 11) in PLOS One. "If we cannot pull DNA from copal, then we absolutely cannot do it from amber either," Penney, an expert...

The study seems to lay to rest speculation and some earlier research that claimed to have extracted and sequenced ancient DNA from amber-entombed insects and sounds the death knell for anyone hoping to bring dinosaurs back to life. But sci-fi fans can at least revel in the fact that a sequel to Jurassic Park, dubbed Jurassic World, is slated to hit movie screens in the summer of 2015.