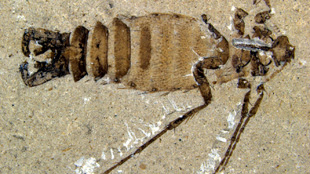 Paleontologists excavating in eastern China have dug up nine exquisitely preserved fossils of fleas dating between 125 and 165 million years—pushing back the current fossil record by about 60 million years. The discovery, which was published in Nature this week, offers scientists a rare glimpse into how the ancient parasites fed on their prey during the Jurassic and Cretaceous periods. Back then, it seems, fleas were not only wingless, but also giant—measuring up to twice the size of modern fleas.

They also didn’t have hind legs specialized for jumping, which suggests that the fleas fed on their hosts by “hiding in the periphery and then scrambling onto the host for brief periods to feed before bolting again,” Michael Engel, a palaeoentomologist at the University of Kansas who led the study,...

“Their special morphology suggests that their earliest hosts were hairy or feathered ‘reptilians,’ and that they radiated to mammalian and bird hosts later in the Cenozoic,” the authors wrote in the Nature paper.