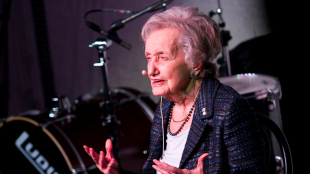 WIKIMEDIA, EVA BLUEWinners of the biennial Kavli Prize, announced yesterday (May 29), were honored for their contributions to astrophysics, nanoscience, and neuroscience. Among the latter included three researchers who “all played major roles in advancing our understanding of memory and in the development of techniques to measure the brain,” according to a press release.

Brenda Milner of McGill University, John O’Keefe of University College London, and Marcus Raichle of Washington University School of Medicine share the neuroscience award. Raichle is known for his work in developing neuroimaging techniques, such as functional magnetic resonance imaging (fMRI) and positron emission tomography (PET). O’Keefe has made major contributions to understanding the role of the hippocampus in memory. Milner’s achievements rest in part on her groundbreaking work to describe various types of memory by studying an amnesiac patient known as H.M.

The colaureates in nanoscience are Thomas Ebbesen of the Université Louis...

Astrophysicists Alan Guth of MIT, Andrei Linde of Stanford University, and Alexei Starobinsky of the Landau Institute for Theoretical Physics, Russian Academy of Sciences, will split the third prize. The nine laureates will share a $3 million award.