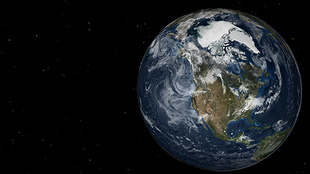 FLICKR, NASA GODDARD SPACE FLIGHT CENTEROne way for species to beat climate change is to evolve to thrive at new temperatures. But a study published last month (June 26) in the journal Ecology Letters argues that vertebrates will need to evolve at rates that are “largely unprecedented” to match the pace at which today’s temperatures are changing.

The researchers calculated past rates of evolution in response to temperature by looking at the evolutionary histories of more than 500 currently living species, including various reptiles, birds, amphibians, and mammals.

"We found that, on average, species usually adapt to different climatic conditions at a...

The Intergovernmental Panel on Climate Change predicts that, in a scenario where the economy grows rapidly and fossil fuels are used intensively, temperatures on Earth will rise by an average of 4 degrees Celsius by 2100. The researchers say that to withstand this pace of change, vertebrates would need to respond to changes in climate more than 10,000 times faster than they have on average in the past.

However, Michael Donoghue, a Yale University ecologist and evolutionary biologist who was not involved in the study, told ScienceNOW that perhaps animals have adapted slowly in response to changing climate because historically there has been less pressure to evolve rapidly. “Somebody could reasonably argue that they’ve been evolving at this rate because climates have been changing slowly.”