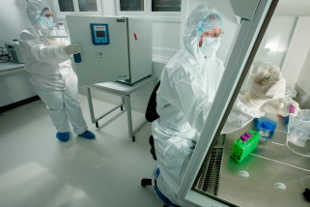 DNA work at the GeoGenetics labMIKAL SCHLOSSERThe Kennewick Man, discovered nearly 10 years ago on a bank of the Columbia River near Kennewick, Washington, was Native American, according to a study published today (June 18) in Nature—a finding that could have significant legal ramifications.

On the basis of its narrow skull and protruding facial features, the 8,500-year-old skeleton was originally suspected of being Caucasian (perhaps an early European-American pioneer), then Asian (possibly a member of the population that gave rise to Polynesians and the indigenous Ainu people of Japan). But Native American tribes have challenged these conclusions, claiming the Kennewick Man as one of their own. The tribes call him the Ancient One, and appealed to the US court system to allow them to bury what they considered to be sacred remains. In 2004, the 9th US Circuit Court of Appeals sided with scientists who wanted the...

“I think this [information] would have been useful evidence in the original NAGPRA decision and might have led to a different result,” Hank Greely, a legal scholar at Stanford University in California, told Nature News.

Willerslev’s team conducted the genome analysis on DNA extracted from just 200 milligrams of a hand bone, which yielded just enough material for 1x coverage of the whole genome. “We can now get information out of shorter pieces of DNA and—given the very degraded DNA in Kennewick man—that is absolutely key in addressing these questions,” coauthor David Meltzer of Southern Methodist University in Dallas, Texas, said at the press conference. (For more about the technologies researchers are using to analyze ancient DNA, see this month’s feature story “What’s Old Is New Again” and the accompanying TS Live video, “Genetic Time Machine.”)

The results suggest that modern Native American people and the Kennewick Man both evolved from a common ancestor that lived about 9,200 years ago. A direct comparison between Native Americans and the ancient skeleton was made possible by the donation of DNA from the Confederated Tribes of the Colville Reservation, one of the five tribes claiming Kennewick Man. It is possible that members of the other tribes show as much—or greater— genomic similarity to the Kennewick Man, Willerslev said.

The Army Corps of Engineers, which currently has legal custody of the remains, “will certainly review those findings, and will be using this review and other information to determine if, and if so how, NAGPRA applies,” Army Corps spokesman Michael Coffey told The Washington Post. “We will do this as quickly as possible.”

When questioned about how their study would impact the legal proceedings, the researchers maintained their impartiality on the matter. But Willerslev did point out the ironic nature of the finding that the Kennewick Man was Native American. “The reason why we can come to this conclusion, scientifically speaking, is because the remains were kept out for science,” he said.