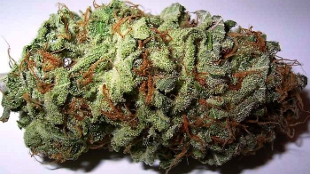 WIKIMEDIA, HUPU2Marijuana law reform has been in the air lately. Last November, Colorado and Washington voted to legalize recreational weed use in their states, and Illinois recently became the latest state to legalize the drug for use as a medicine. In a speech at the American Bar Association’s annual meeting this month, US Attorney General Eric Holder announced that the federal government would no longer seek harsh mandatory minimum sentences for drug offenders that had no ties to gangs, violence, or trafficking—though he drew the ire of medical marijuana proponents for failing to mention the drug specifically once during the speech. Now, the National Institute on Drug Abuse (NIDA) has weighed in on what appears to be a rising tide of pro-marijuana sentiment.

In response to an advertisement sponsored by the pro-pot group Marijuana Policy Project, which called marijuana “less toxic” than alcohol, NIDA wrote in an e-mail to...

Just a few days before PolitiFact’s analysis of the “less toxic” claim ran online, NIDA released a statement on its own website, reaffirming its commitment to studying the effects of marijuana as a drug of abuse and addiction. “NIDA funds a wide range of research on and related to marijuana (cannabis); its main psychoactive ingredient, THC; and chemicals related to THC (cannabinoids),” the statement read. “This includes understanding patterns of use, its effects on the brain and behavior, and developing prevention and treatment interventions.”

Notably absent from the federal government’s marijuana research funding portfolio are studies that look into the supposed medicinal benefits of the smoked form of the drug. As The Scientist reported last year, several researchers who would like to study the medicinal properties of marijuana are stymied by the fact that the US government blocks access to federal stores of the drug and funding to conduct such research.