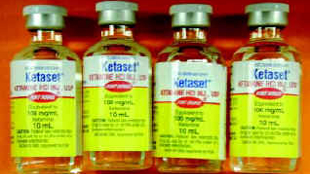 Ketamine bottles, Wikimedia, USGOV-DOJKetamine, a commonly used drug for sedation and general anesthesia and an abused hallucinogen, strengthens neuronal connections in the brain that help rats overcome oppressive fear, according to a presentation at this week’s Neuroscience 2012 conference in New Orleans, organized by the Society for Neuroscience (SfN). The study could have implications for the use of ketamine to treat patients with post-traumatic stress disorder (PTSD), who are often crippled by violent memories.

Current therapies for PTSD, including behavioral therapy and repeated exposure to stimuli representative of the original trauma, are largely unsuccessful at permanently ridding patients of their fear. “There is an urgent need to develop new drugs that improve current therapies,” study author Neil Fournier of Yale University School of Medicine said in a press release. “To extinguish fear, brain circuits must be remodeled and new nerve connections made, particularly in the brain’s medial prefrontal...

After conditioning rats to fear a particular tone, the researchers gave the animals ketamine or saline, then retrained them not to fear the tone. The next day, the rats that had been treated with ketamine were more likely to recall the new, positive association and less likely to exhibit fear-related freezing behavior when the tone was played, while saline-treated rats tended to recall the original, bad association. The findings suggest that a combination of exposure therapy and ketamine may help improve treatment for PTSD and other anxiety disorders.

The researchers believe that upon first learning to fear the sound, synaptic connections between nerve cells in the rats’ brains were damaged, but ketamine, which was recently shown in a study of the drug as a depression treatment in humans to strengthen nerve connections, helped re-establish these connections during the second phase of the experiment. “Our laboratory has shown that the therapeutic effects of ketamine on depressive behavior require dendritic spine and synapse formation within the medial prefrontal cortex,” the authors wrote in an abstract. “Our findings suggest that ketamine-induced plasticity encourages the formation of new neuronal circuits that promote extinction learning.”

(For updates on research being presented at Neuroscience 2012, follow The Scientist’s Twitter feed, and look for #sfn12.)