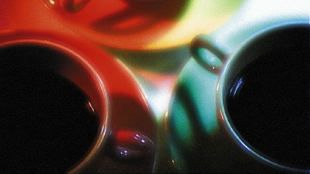 WIKIMEDIA, HENDRIKE Big-time coffee drinkers—those who consume at least four cups a day—have a greater chance of dying earlier than people who don't imbibe as much. That's according to a study published in Mayo Clinic Proceedings this week (August 15). The findings only apply to heavy coffee drinkers under the age of 55, and they serve to add to the jumble of conflicting results about the health impacts of coffee. “There continues to be considerable debate about the health effects of caffeine, and coffee specifically, with some reports suggesting toxicity and some even suggesting beneficial effects,” Carl Lavie, one of the study’s authors and a cardiologist at Ochsner Medical Center in New Orleans, said in a press release.

Lavie’s study included more than 43,000 participants, who were typically followed for 17 years. During that time, around 2,500 people died. After taking several confounding variables into account, the researchers found...

It’s not clear what might be driving this association. The findings were for all-cause mortality, rather than for any particular condition, such as heart disease. The researchers hesitantly pointed to genetics and addiction as possible culprits. “We hypothesize that the positive association between coffee and mortality may be due to the interaction of age and coffee consumption, combined with a component of genetic coffee addiction,” Junxiu Liu and Xuemei Sui at the University of South Carolina said in the press release.

While the study can’t prove cause-and-effect, the authors urged caution when it comes to coffee. “On the basis of these findings, it seems appropriate to suggest that younger people avoid heavy coffee consumption,” they wrote in their paper.