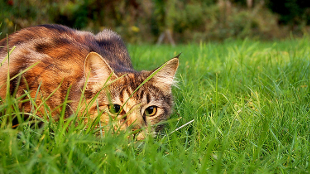 WIKIMEDIA, JENNIFER BARNARDAs many as 3.7 billion birds and 20.7 billion mammals are killed each year by seemingly unthreatening house cats, according to a study published yesterday (January 30) in Nature Communications. That’s more than the body count from getting hit by cars, running into buildings, or being poisoned by pest control efforts, the researchers said.

On islands, cats have been linked to the extinction of 33 species, BBC News reported, but little was known about their effect on mainland wildlife communities. So researchers from the Smithsonian Conservation Biology Institute (SCBI) and the US Fish and Wildlife Service performed a meta-analysis of previous studies on cats’ predatory impacts, and found that the petite felines kill many more animal deaths than assumed. In total, the authors estimated cats are responsible for the deaths of 1.4 to 3.7 billion birds each year—four times greater than previously estimated—as well as 6.9...

“Our study suggests that they are the top threat to US wildlife,” Pete Marra of the SCBI told BBC News. While stray and feral cats do most of the killing, the authors noted, household pets are by no means innocent. “We hope that the large amount of wildlife mortality indicated by our research convinces some cat owners to keep their cats indoors,” Marra said, “and that it alerts policymakers, wildlife managers and scientists to the large magnitude of wildlife mortality caused by cat predation.”