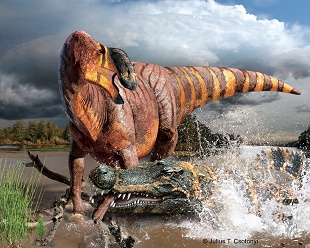 NCSU, JULIUS T. CSOTONYIA new hadrosaur discovered in central Utah has been named Rhinorex condrupus—king of noses—for its most distinctive feature. The 75-million-year-old specimen is the first hadrosaur, a group of duck-billed herbivores, to be found in this region, according to results published last week (September 17) in the Journal of Systematic Paleontology.

“The purpose of such a big nose is still a mystery,” study coauthor Terry Gates of North Carolina State University said in a press release. If Rhinorex was like other known hadrosaurs, “it likely did not have a super sense of smell; but maybe the nose was used as a means of attracting mates, recognizing members of its species, or even as a large attachment for a plant-smashing beak.”

The specimen was first excavated by in 1992 by geology students working in the region, reported National Geographic’s Laelaps. Initially studied for...

Despite its supersized sniffer, Rhinorex’s most striking characteristic is where and when it lived. The wide variety of hadrosaurs found globally was probably because different species branched out from one another as they were separated by geographical barriers that created habitat niches. But Rhinorex’s nearest hadrosaur neighbors were found 250 kilometers (155 miles) away, in southern Utah. If they lived at the same time, “this is one of the most dramatic cases of dinosaurian habitat partitioning recorded,” especially for animals of this size, the authors wrote in their paper.

The coexistence of two distinct species may have been due to differences in their lifestyle; Rhinorex lived near an estuary close to the sea, whereas the other hadrosaurs were found in regions that were more swamp-like. Another possibility, according to Laelaps, is that the two species lived at slightly different times. “This discovery gives us a geographic snapshot of the Cretaceous,” Gates added in the statement. It “helps us place contemporary species in their correct time and place.”