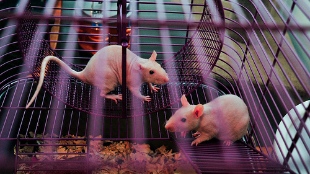 In the past few months, all ferry companies that once shuttled lab animals by sea into the United Kingdom have closed their doors to such business after the companies were bombarded with emails and letters from a campaign led by the National Anti-Vivisection Alliance.

"All the while we had carried those animals discreetly without people knowing, but when the company's reputation comes under fire in an organized way, we felt it was time to take the decision to stop," Chris Laming, a spokesperson from P&O Ferries told ScienceNOW. Similar reasoning also forced Stena Lines and DFDS Seaways to cease their animal-shuttling services.

Around 15,000 live research animals are brought into the UK each year, most of which are mice, reported BBC News. These are animals that can’t be transported as frozen embryos, either because of strain sensitivity or lab capabilities. With the final boat...

Scientists upset over being cut off from transported lab animals have highlighted how important it is that different collaborators work with the same genetic strain, and the effects this will have on research projects.

"Very few animals are transported into and out of the UK for medical research, so it's understandable that these companies conclude that the risk of protests outweighs the modest financial gain,” former science minister Paul Drayson wrote in an editorial in The Times of London, reported ScienceNOW. “However, these companies also have a wider responsibility to society.”

Government officials are trying to work out a deal between the research and transport industries to resume scientist access to research animals, reported The Telegraph.