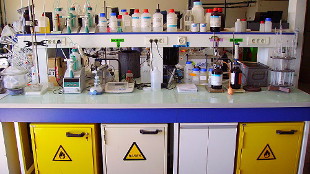 Accidents happen. As any scientist knows, plenty can go wrong when working with potentially dangerous microbes, chemicals, or equipment. Last week (April 17), Reddit user mmm_whatcha_say opened a thread asking scientists to share “the worst thing that has happened in their lab.” The thread has attracted nearly 2,800 comments. Among the top 500:

AnthraxCat: “We had a grad student working with a relatively benign strain of Vibrio cholerae who didn’t wear gloves, or wash her hands before eating lunch. She got cholera. The doctors were baffled.”

Jfmorrison: “Postdoc ordered a pizza and ate part. Put the rest in the -80 C freezer. Next night, wants a snack, puts in microwave on defrost for a couple minutes. Cheese looks melted so he takes a bite. The center is still frozen solid and he gets ice burns on his tongue, mouth, and lips.”

Plasmonical: “Grad student decides to use an ultracentrifuge, needing to spin at about 1,000,000g (~9800km/s2). Decides to load it with all his samples on one side of the drum (unbalanced). During spin up, the drum rips itself off the motor arm and shreds the interior machinery as it bounced around. RIP ultracentrifuge.”

Blackday44: “There was a communication issue, and someone threw out about $20,000 worth of samples.”

LabMoneyWaster: “Added the wrong chemical to a 300L solution that compromised an experiment and wasted $150,000 of company money.”

Humorous confessions aside, lab safety is a serious issue. In the spirit of sharing, The Scientist asks: What’s the worst #labblooper you’ve witnessed? Tweet @TheScientistLLC using the hashtag.