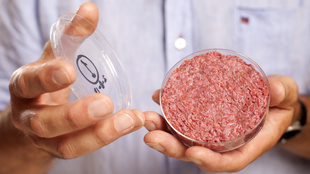 “What we are going to attempt is important because I hope it will show cultured beef has the answers to major problems that the world faces,” said Post in a statement, adding that he expects commercial production of the lab-grown meat could begin in 10 to 20 years.

The in vitro burger was derived from stem cells taken from cow shoulder muscle. The cells were cultured in Petri dishes...

Schonwald told The New York Times that “the bite feels like a conventional hamburger,” but that the meat tasted “like an animal-protein cake.”

Sandra Stringer, a microbiologist at the Institute of Food Research, was more clinical in her appraisal of the lab-grown meat. “We can see no reasons why this product would be less safe than conventional meat,” Stringer told The Telegraph. “It is likely that it will be produced in sterile conditions, and so could be much less prone to microbial contamination.”