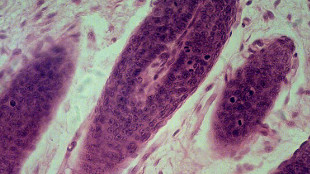 Hair follicle in mammalian skinWIKIMEDIA, CIRCA24Researchers from Columbia University in New York City have developed a technique to grow human dermal papilla cells in 3-D culture that can induce the growth of de novo hair follicles in human skin, paving the way for a new approach to treating baldness. In a paper published in the Proceedings of the National Academy of Sciences this week (October 21), Angela Christiano and her colleagues report a global gene expression analysis of cultured human dermal papilla cells. The researchers found distinct transcriptional signatures between such cells grown in a 2-D versus a 3-D environment. These molecular markers helped them to partially restore the inductive capability of cultured cells, when grown as spheroids.

Using this new approach, the researchers then cultured papilla cells from seven men, which they injected into skin grafts, finding that new hair follicles grew in five. “The dermal...

Still, Christiano noted there is more work to be done. “At the moment we’re only getting quite a small hair,” she told The New York Times.

Overall, though, the work is an important first step. Case Western Reserve University skin biologist Radhika Atit, who was not involved in the study, told Science Now that the team’s “work is very elegant and extremely rigorous. . . . This is a big technical advance.”