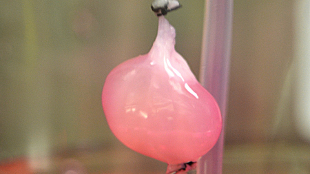 A rat kidney scaffold, seeded with human endothelial and rat kidney cells, in an organ bioreactor.. OTT LAB, CENTER FOR REGENERATIVE MEDICINE, MASSACHUSETTS GENERAL HOSPITALResearchers at Massachusetts General Hospital in Boston have made functioning rat kidneys in the lab and transplanted them into the rodents, where the bioengineered organs filtered blood and produced urine, according a report out this week (April 14) in Nature Medicine. The work is an important step toward the long-term goal of creating replacement kidneys for humans, who currently have to wait for donor kidneys.

“The real value of this study is that it’s the kidney [rather than the heart or other organs] and it’s a proof of concept, and the clinical need is so great,” Stephen Badylak of the University of Pittsburgh told The New York Times.

A team led by organ-regeneration specialist Harald Ott made the replacement kidneys by first stripping...

The method, pioneered by Ott and colleagues in 2008, has previously been used to grow hearts and lungs. If it can be refined and scaled up to produce functional human kidneys, the technique could provide ready-made replacement kidneys for people who currently have to wait for donor organs, which are in short supply. In addition, these tailor-made organs would be less likely to be rejected by the recipient’s immune system.

Ott and his colleagues are now testing the approach with pig and human kidneys. But the prospect of a bioengineered kidney being implanted into humans remains distant, Vanderbilt University nephrologist William Fissell told Nature. “In almost every area in medicine, the leap from rodent to man has been extraordinarily difficult, and that has seemed to be the case with organ scaffolds as well.”