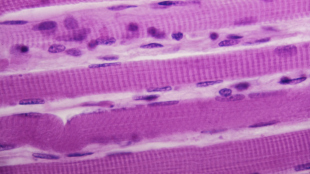 WIKIMEDIA, ROLLROBOTERScientists have successfully grown functional skeletal muscle in the lab and, after implanting it into a mouse, have observed the tissue fix itself after an injury. The muscle can also contract and flex similar to native tissue, the researchers reported in PNAS last month (March 31). “This is the first time we’ve seen muscle fibers contract so strongly in the lab,” Nenad Bursac, a biomedical engineer at Duke University in North Carolina and one of the authors of the study, told Quartz. “It was comparable to the contracting forces you’d see in an actual mouse muscle.”

The researchers implanted the lab-grown muscle into mice and observed its function through a peephole cut into the animals’ backs. “A number of researchers have ‘grown’ muscles in the laboratory and shown that they can behave in similar ways to that seen in the human body,” Mark Lewis, a bioengineer at Loughborough University who was not involved in the study, told the BBC. “However, transplantation of these grown muscles into a living creature, which continue to function as if they were native muscle has been taken to the next level by the current work.”