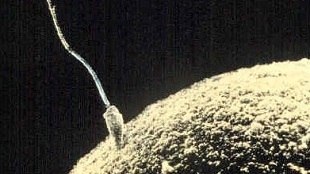 WIKIMEDIA, PUBLIC DOMAIN IMAGESResearchers have produced early-stage sperm cells, called primordial germ-cell-like cells (PGCLCs), from an adult male’s skin cells, according to a study published this week (May 1) in Cell Reports. A team led by Renee Reijo Pera, previously of Stanford University and now at Montana State University, used skin cells from three men who had Y chromosome gene defects that prevented them from producing sperm.

The researchers first converted the skin cells into induced pluripotent stem cells (iPSCs), and then transplanted the IPSCs into mouse testes, where they were differentiated into PGCLCs. Although only 1 percent of men have genetic defects that make them unable to produce sperm, the team suggested that engineering similar stem cells from other tissues could one day help cancer survivors who have lost the ability to produce sperm.

The work is still early-stage, but the researchers are optimistic about its potential....

“You’ll never restore them back to normal, but they might have a few months or years of making sperm that's enough to give them fertility back,” said Allan Pacey, who studies andrology at Sheffield University in the U.K. and was not involved in the research, in an interview with The Guardian.

Some scientists questioned whether this new technique will succeed when several other promising techniques in the past have not. “It’s very, very hard to extrapolate any data from mice into humans,” David Smotrich, a fertility specialist in La Jolla, California, told U.S. News and World Report. “Nothing we’ve done has translated into anything that can be actively used to treat patients.”