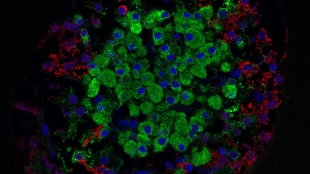 Beta cells (green) in the pancreas secrete insulin to regulate blood glucose levelsWIKIMEDIA, MASURScientists claim to have successfully grown insulin-secreting pancreatic beta cells from human embryonic stem cells. Douglas Melton, a Harvard University stem cell scientist, and colleagues reported the in vitro feat on Thursday (October 9) in Cell. Though the work is far from achieving clinical relevance, it presents a possibility for a cell therapy that could treat diabetes. “We’re tired of curing mice,” Melton told The Boston Globe. “Most patients are sick of hearing that something’s just around the corner; I’m sick of thinking things are just around the corner. But I do believe in the big picture.”

Dieter Egli, assistant professor in the pediatrics department at Columbia University Medical Center, told The Globe that his laboratory will try to repeat Melton’s experiment immediately. “It’s a wonderful result,” he said, “something we’ve been waiting...

Melton’s procedure requires six steps, involving chemicals and growth factors, and takes 40 days to go from either embryonic or adult stem cells to mature pancreatic beta cells. And the process yielded billions of the insulin-secreting cells. “You’ll be able to create buckets and buckets of cells,” Albert Hwa, a scientist at JDRF, a New York-based advocacy group focused on diabetes that partially funded the Harvard research, told the Washington Post. “Numbers will no longer be a limitation.”

Researchers are already trying to replicate the work and are seeking ways to scale the process using robotics, according to Susan Solomon, chief executive of the New York Stem Cell Foundation, who also spoke to the Washington Post.