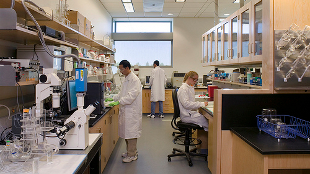 FLICKR, UNIVERSITY OF CALIFORNIA DAVISScientists may be overestimating the safety of their laboratories, according to early analysis of an international survey of attitudes and practices among researchers.

Of the 2,400 people who responded, 86 percent said they think their labs are safe places to work. But just under half had suffered injuries in the lab, ranging from monkey scratches and snakes bites to chemical inhalation. Most common were minor injuries, but 30 percent of respondents said they had seen at least one “major” lab injury. What’s more, around 25 percent said they had experienced injuries that they did not report, and only 60 percent said they had received safety training on specific hazards or agents they work with.

The study was commissioned by the Center for Lab Safety at the University of California, Los Angeles, (UCLA) following several incidents, most notably the death of 23-year-old research assistant Sheharbano Sangji in...

The survey highlighted a difference in attitudes between junior and senior scientists. Around 40 percent of postdocs and PhD students reported that people work alone in the lab every day, potentially increasing the danger in case of an accident; only 26 percent of professors, department heads, and principal investigators reported seeing lone workers that frequently. This pattern suggests that supervisors aren’t always aware of the safety culture in their own labs.