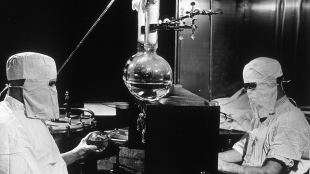 WIKIMEDIA, ROY PERRYEarlier this year, researchers from the National Heart, Lung, and Blood Institute and colleagues published data in the Proceedings of the National Academy of Sciences on a newly identified virus, called NIH-CQV, which was present in serum from Chinese patients with seronegative hepatitis. They reported that NIH-CQV was related to parvoviruses and circoviruses with “remarkable genetic heterogeneity within patients,” but it was unclear whether it had any role in the etiology of the patients’ disease.

Skip ahead to last week, and another group—this one based in the United States—reported in the Journal of Virology that this same virus popped up in a number of clinical samples as part of a similar study looking at seronegative hepatitis. Again, the samples were nearly identical to one another in DNA and amino acid sequence, as well as to NIH-CQV. Given that the virus was present in all of the...

Retesting the individual samples, this time using a different technique to extract the nucleic acid, the team no longer found any evidence of the virus. After doing a bit of detective work, the researchers figured out that Qiagen spin columns used for extraction appeared to be the source of the contamination. To try and hunt down where the virus originated, the researchers compared their virus to sequences from a variety of databases, and found similarities among metagenomes sampled off the coasts of California and Oregon. “As the sample processing and generation of these datasets did not involve the use of columns or kits manufactured by Qiagen . . . these findings revealed that [the contaminant] is an environmental virus likely originating in ocean seawater and may have inadvertently contaminated the spin columns during manufacture,” the researchers wrote in their report.

In a statement emailed to The Scientist, Qiagen spokesman Thomas Theuringer said that the company is evaluating its products and will attempt to reproduce the study's findings. He pointed out that for most applications, the potential contamination should not affect results. "For 'deep sequencing' applications, however, as described in the study, a product from the QIAamp UCP product line would be the appropropriate sample preparation kit. It has a 32 times higher purity level compared to standard methods." Customers can exchange their tubes for another product line. "QIAGEN will offer all customers who have purchased a QIAamp Viral RNA Mini Kit or QIAamp UltraSens Virus Kit for their deep sequencing applications to exchange the spin columns at not cost," Theuringer said.

Vincent Racaniello, a virologist at Columbia University, wrote on his virology blog that the study was reminiscent of the situation with XMRV, a retrovirus that was thought to underlie chronic fatigue syndrome, but turned out to be a contaminant from human cells grown in mice. He added that deep sequencing is a powerful tool, but must be carefully controlled, “from the water used to the plastic reagents.”

“Most importantly,” he added, “laboratories involved in pathogen discovery must share their sequence data, something that took place during this study.”

Correction: The original version of this story described the authors of the first paper as Chinese. Just one member of the research team is at a Chinese institution, while most of the other members are at the National Heart, Lung, and Blood Institute in the U.S. The article has been updated to more accurately reflect the affiliations.