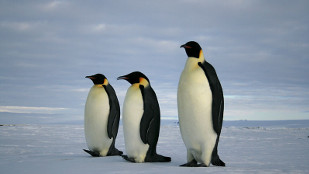 WIKIMEDIA, LIN PADGHAMScanning penguin genomes, researchers in the U.S. and China uncovered evidence to suggest that the aquatic flightless birds have lost the ability to taste sweet, umami, and bitter. Their work was published in Current Biology this week (February 16).

“As far as we know, penguins are the only birds that have lost three of the five basic tastes,” study coauthor Jianzhi George Zhang of the University of Michigan in Ann Arbor told New Scientist.

“Given the way their mouths are oriented, and how they hunt, capture, and consume their prey, it’s not surprising that penguins may have limited taste perception,” ecologist Michael Polito of Louisiana State University who was not involved in the work told The Verge.

Penguins’ “behavior of swallowing food whole, and their tongue structure and function, suggest that penguins need no taste perception,” Zhang told BBC News. However, he added,...

In their analysis, the researchers homed in on the gene that encodes the protein Trpm5. “Previous studies showed that Trpm5 doesn’t function at low temperatures, so my hypothesis is that the cold Antarctic essentially made the three tastes that require Trpm5 unusable,” Zhang told New Scientist. “Thus, the taste receptor genes gradually degenerated and got lost.”