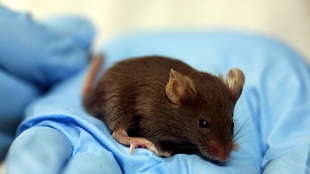 WIKIMEDIA, RAMANearly a decade ago, researchers discovered that the gene FOXP2 appeared to be essential for speech in humans and communication in mice, birds, and bats.  In work published yesterday (February 20) in the Journal of Neuroscience, a group from the University of Maryland School of Medicine in Baltimore showed that the protein produced by this gene is more abundant in the brains of young girls than boys, potentially supporting the observation that girls develop speech sooner that boys.

The researchers started their experiments with a group of 4-day-old mice, separating the male and female pups from the mother and recording the number of calls each made. The males made twice as many calls as the females and when the mother was reunited with her offspring, she retrieved the males first. When the researchers looked in the brains of these mice, they saw that the FOXP2 protein was...

Turning to humans, the researchers found just the opposite. Measuring the amount of FOXP2 protein in the brain language areas of 4- and 5-year-old children who had recently died in accidents, the team found 30 percent more FOXP2 in girls than boys.

Researchers caution that there may be more than one gene involved in human language and that looking at a small sample of children may not provide precise conclusions. "Speech and language . . . are so much more complex and interesting than simple innate vocalizations," such as those of mice, Simon Fisher co-discoverer of the FOXP2 gene, now at the Max Planck Institute for Psycholinguistics in Nijmegen, the Netherlands, told ScienceNOW.