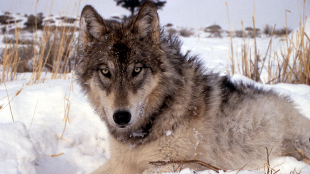 A Yellowstone wolfWIKIMEDIA, DOUG SMITH - NATIONAL PARK SERVICEMore than three quarters of Earth’s large carnivorous animal species are now in decline, a trend that has far-reaching ecological impacts, according to a research published on Friday (January 10). The study, published in Science, tracked the conservation status and ecological roles of the planet’s 31 largest predators, including lions, gray wolves, dingos, and bears. “Globally, we are losing our large carnivores,” lead author William Ripple of Oregon State University told the BBC. “Their ranges are collapsing. Many of these animals are at risk of extinction, either locally or globally.”

Habitat loss, hunting, and prey depletion are key among the forces conspiring against many of the imperiled carnivore species, the authors wrote. Seventeen of the 31 species considered in the new research are now restricted to territories that are less than half their historic range.

The answer to the problem, according to Ripple and his coauthors, lies in human hands. “It will probably take a change in both human attitudes and actions to avoid imminent large carnivore extinctions,” the authors wrote. “A future for these carnivore species and their continued effects on planet Earth's ecosystems may depend on it.”