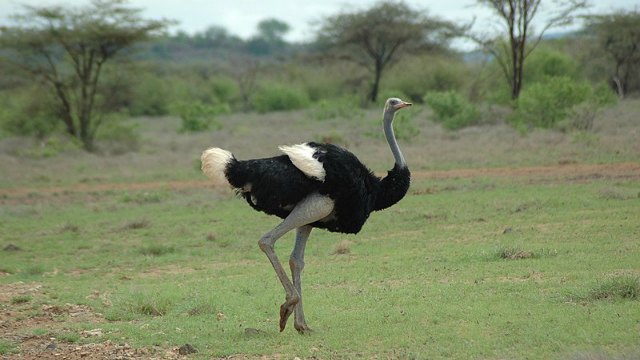 The Somali ostrich, Struthio molybdophanes, is listed as “vulnerable” by IUCN.WIKIMEDIA, DONNA BROWNSpecies within the “Goldilocks zone”—neither too big nor too small—have the lowest risk of extinction, while very large and very small animals are at greatest risk, according to a study published yesterday (September 18) in PNAS.

“Surprisingly, we found that not only the largest of all vertebrate animal species are most threatened, but the very tiniest ones are also highly threatened with extinction,” lead author Bill Ripple, of Oregon State University, tells BBC News.

“Knowing how animal body size correlates with the likelihood of a species being threatened provides us with a tool to assess extinction risk for the many species we know very little about,” Ripple says in a release.

Ripple and his team created a database to examine the correlations between body mass, range size, and extinction risk for more than...

“Indeed, based on our findings, human activity seems poised to chop off both the head and tail of the size distribution of life,” the authors write in the study.

While humans already make efforts to conserve well-known large mammals, such as lions, elephants, and rhinos, the authors say that large non-mammal vertebrates, such as the whale shark, the Atlantic sturgeon, and the Komodo dragon, also need attention, according to the release.

“I think, for the smallest species, first of all we need to bring higher awareness to them, because the larger ones get a lot of attention, but the smaller ones get very little,” Ripple tells the BBC.