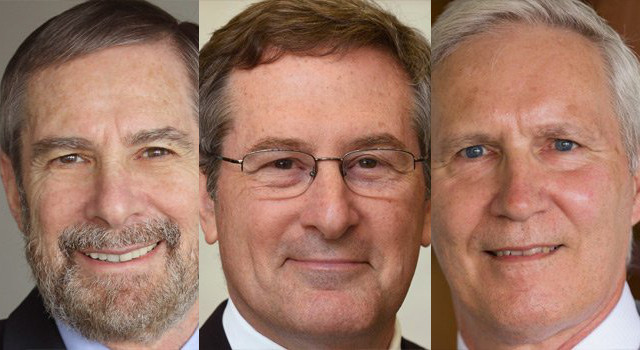 L-R: Douglas Lowy, Michael Hall, John SchillerLASKER FOUNDATIONDouglas Lowy, the acting director of the National Cancer Institute, first learned about vaccines in 1955 when he accompanied his mother, a physician, to a presentation by Jonas Salk about the results of his newly developed polio vaccine. “I learned far more about polio virus and the vaccine than was probably appropriate for a 12-year-old boy,” Lowy said during a press conference today (September 6) announcing his receipt of the Lasker-DeBakey Clinical Medical Research Award.

Decades after his introduction to vaccines, Lowy would launch a long-lasting collaboration with John Schiller, deputy chief of the Laboratory of Cellular Oncology at the NCI, culminating in the development of a vaccine against human papilloma virus (HPV), for which the duo won the 2017 award. “[We] have worked together for more than 30 years,” Lowy said, “and it has been an extraordinarily...

This year’s Basic Medical Research Award honored the work of Michael Hall, a cell biologist at the University of Basel in Switzerland who discovered the TOR (target of rapamycin) pathway and its role in cell growth. During the press conference, Hall said the achievement was an example of the importance of curiosity-driven research.

“We started by working on a problem, which was not working very well, and we went off in a tangent, taking a very unusual approach, and that was to use a drug which was developed for use in humans and seeing if that drug would do anything in a yeast cell,” he said. “This was a rather radical approach and risky approach, but it turned out to be a good approach because it enabled us to discover a protein which plays a very central in the function of the cell.”

See “Calm in the STORm,” a profile of Michael Hall

The drug was rapamycin, new in the 1980s, and Hall found that it blocked yeast cell division. He and his colleagues went on to identify the protein that rapamycin binds to and the gene products that interact with the bound complex.

It turned out that this pathway controls numerous basic cellular functions, including protein and ribosome synthesis. Despite TOR’s widespread importance in the cell, it took two years to convince journal editors and reviewers to accept Hall’s paper. “It was a very dark period in the lab, because nobody believed us.”

Published in 1996 in Molecular Biology of the Cell, Hall’s description of TOR’s functions has now been cited 675 times.

In addition to the trio of scientists, the Lasker Foundation honored Planned Parenthood, which won the 2017 Lasker-Bloomberg Public Service Award.