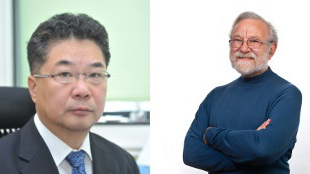 Kazutoshi Mori (left), Peter Walter (right)ALBERT AND MARY LASKER FOUNDATIONKazutoshi Mori of Kyoto University in Japan and Peter Walter of the University of California, San Francisco, have won the 2014 Lasker Award for basic medical research. Mori and Walter are being honored by the Albert and Mary Lasker Foundation for their work related to the unfolded protein response—a cellular stress response that has been implicated in several protein-folding diseases.

In its announcement, the foundation said that “Mori and Walter’s work has led to a better understanding of inherited diseases such as cystic fibrosis, retinitis pigmentosa, and certain elevated cholesterol conditions in which unfolded proteins overwhelm the unfolded protein response.”

Three years ago, the Lasker Foundation honored Franz-Ulrich Hartl and Arthur Horwich for their protein-folding work with its 2011 basic research award.

Meanwhile, Alim Louis Benabid of Joseph Fourier University in Grenoble, France, and Mahlon DeLong of the...

And the University of Washington’s Mary-Claire King has won the 2014 Lasker-Koshland Special Achievement Award in Medical Science for “bold, imaginative, and diverse contributions to medical science and human rights” related to her work to reunite missing persons or their remains with their families, as well as her discovery of the cancer-related BRCA1 gene locus. In a commentary published in JAMA today (September 8), King and her colleagues advocated for population-based screening for cancer-related genetic variants. “Population-wide screening will require significant efforts to educate the public and to develop new counseling strategies, but this investment will both save women’s lives and provide a model for other public health programs in genomic medicine,” they wrote.

This year’s recipients will receive a $250,000 honorarium per category. The awards will be presented on Friday, September 19, in New York City.