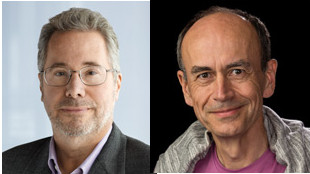 Genentech’s Richard Scheller and Thomas Südhof from the Stanford University School of Medicine have won the 2013 Lasker Award for basic medical research. Scheller, executive vice president of research and early development at the South San Francisco-based biotech, and Südhof are being lauded by the Albert and Mary Lasker Foundation for their work unraveling the molecular machinery and regulatory mechanisms behind rapid neurotransmitter release.

In its announcement, the foundation noted that Scheller and Südhof independently identified, isolated, and defined fundamental interactions among the key molecules involved in rapid neurotransmitter release “at a time . . . when not a single protein in the process had been characterized.”

Meantime, the foundation presented its 2013 Lasker...

This year’s recipients will each receive a $250,000 honorarium, and will be presented with their awards on Friday, September 20, in New York City.