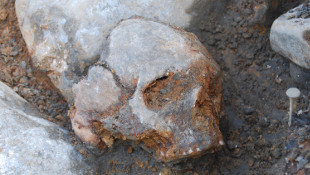 The skull of a woman excavated from the Kanaljorden site in southern Sweden.CULTURAL HERITAGE FOUNDATION, FREDRIK HALLGREN

The first humans to arrive in Europe, some 45,000 years ago, were hunter-gatherers who were joined by farmers from the Near East about 7,500 years ago. But the genomes of present-day Europeans suggest a third wave of migrants also added to the genetic mix. Now, a study of both modern and ancient DNA has found evidence to suggest that ancient northern Eurasians migrated to Europe after the advent of farming. The results were published last week (September 18) in Nature.

An international team of researchers, led by investigators at Harvard Medical School and the University of Tübingen in Germany, sequenced the genomes of nine ancient humans from the remains of hunter-gatherers who lived in Luxembourg and Sweden about 7,000 to 8,000 years ago, as well as the 7,000-year-old skeleton of a...

Although all of the modern sequences reflected some combination of hunter-gatherer and Near Eastern farmer heritage, most also showed similarities to sequences from a young boy who lived 24,000 years ago near Lake Baikal in Siberia. A northern Eurasian population, which is also related to Native Americans, was likely the third group contributing to present-day Europeans’ genetic makeup. The extent of this ancestry varies among populations. In Sardinians, for example, about 80 percent of sequences are similar to European farmers, while less than 1 percent comes from ancient northern Eurasians; 14 percent of the English genome is derived from Eurasians.

“I think the most exciting aspect of this work is that it is a powerful demonstration of how ancient DNA analyses can provide insights into human history that would be difficult, or impossible, to make from genetic data of contemporary individuals alone,” Joshua Akey, a geneticist at the University of Washington School of Medicine who was not involved in the study, told NPR. “I suspect this study, and several others recently published, are a harbinger of things to come.”