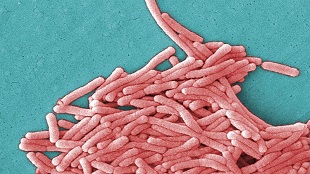 Colorized scanning electron micrograph of Legionella pneumophila bacteriaWIKIMEDIA, CDCSince July 10, 97 people have been hospitalized and diagnosed with Legionnaires’ disease in New York City (NYC), and eight have died, making it the worst outbreak of the disease in the city’s history, NBC News and others reported.

The outbreak appears to be stemming from water-cooling towers that are central components of modern ventilation systems. Health officials found Legionella bacteria at five towers around the city, including Lincoln Hospital and the Concourse Plaza shopping center near Yankee Stadium. All five towers have been disinfected and must outline plans to prevent reemergence of the bacteria. In addition, NYC Mayor Bill de Blasio announced on Monday (August 3) that the city would be putting together a “comprehensive package” of new legislation designed to prevent future outbreaks, USA Today reported. Legionnaires’ disease outbreaks “have become far too common over the past 10...

Jay Varma, deputy commissioner for disease control at the city health department, told The New York Times that such regulations were not been put in place sooner because it can be difficult to pinpoint the source of the disease-causing pathogen. “The challenge is we don’t know where most infections normally come from,” he said. But with all signs pointing to the water-cooling towers as the origin of the current outbreak, the new regulations will likely require close monitoring of large-scaled ventilation systems.

“Previously, and this is the consensus of everyone I’ve talked to who are experts in this field, there wasn’t an identified pattern that suggested these cooling towers were a problem,” de Blasio said on Tuesday, according to The New York Times. “Now we have a pattern.”

Update (August 21): New York City health officials announced this week (August 20) that the Legionnaires’ disease outbreak has come to an end. “Today, I’m happy to declare that the outbreak is over,” Health Commissioner Mary Bassett said at a news conference on Thursday, according to The Wall Street Journal, adding that most people who were hospitalized have been discharged.