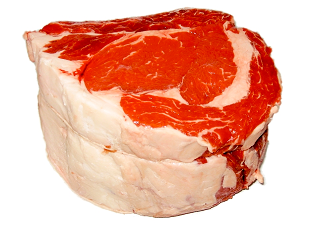 WIKIMEDIA, MICHAEL C BERCHAlthough cooking only took off around 500,000 years ago, human use of tools to process food is thought to have been widespread much earlier. Now, a study from researchers at Harvard University suggests that food processing was key in hominid evolution as a means to increase energy intake while reducing energy expenditure. The findings were published in Nature on Wednesday (March 9).

“By processing food, especially meat, before eating it, humans not only decrease the effort needed to chew it, but also chew it much more effectively,” said study coauthor Katie Zink of Harvard University in a statement. “Using stone tools to process food apparently made possible key reductions in the jaws, teeth and chewing muscles that occurred during human evolution.”

Zink and her colleagues attached sensors to the faces of volunteers to record muscle contractions during chewing. The researchers then fed participants goat meat...

“What we found was that humans cannot eat raw meat effectively with their low-crested teeth,” said study coauthor Daniel Lieberman in the statement. “But once you start processing it mechanically, even just slicing it, the effects on chewing performance are dramatic.” The researchers calculated that if early humans processed food in a similar way, they could have spent 17 percent less time chewing, with 26 percent less force, than if they had eaten unprocessed food.

“It kind of fills in a gap,” Henry Bunn of the University of Wisconsin-Madison told Smithsonian. “For years people have said, well, there’s a package of biological adaptations that relate to a marked change in diet. Larger brains, larger body size, smaller teeth and a smaller gut all point in the same direction: more meat and better means to obtain it.”

However, Katharine Milton of the University of California, Berkeley, told Smithsonian that the study addressed only a small portion of the ancient diet. “While it’s fun to speculate,” she said, “I am not sure that quantifying the energetics of chewing beet root versus goat meat in itself sheds too much light on the energetics of evolving humans.”