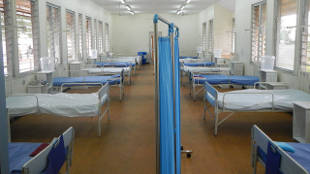 Empty Ebola wardFLICKR, CDC GLOBALIt’s been 15 months since the Ebola outbreak in West Africa began. And Liberia, one of the three countries hardest hit by the epidemic, has suffered more than 10,000 cases and more than 4,700 deaths as a result. But finally there is a ray of hope for the country. More than six weeks—twice the maximum incubation period for Ebola—have elapsed since the last person known to be infected died. On May 9, the World Health Organization (WHO) declared Liberia free of Ebola.

“[The WHO’s] announcement is a testament to all of the extraordinary Liberians and our global partners who worked tirelessly over the past 15 months to fight Ebola,” Harvard Medical School’s Rajesh Panjabi, who is the chief executive of the nonprofit organization Last Mile Health, told Nature. “This is a great achievement, but there is still much work to be done to...

And that’s exactly what Liberia hopes to do, President Ellen Johnson Sirleaf told The New York Times. “I don’t want to call Ebola an opportunity, but we’re using the experience of Ebola to try to rebuild our health systems.”

If successful, Liberia could protect itself from cross-border Ebola transmission from Sierra Leone and Guinea, where the virus continues to infect people. “A case of Ebola doesn’t have to be a national emergency, if you have a health system that can deal with this,” Georgetown University’s Joel Selanikio told LiveScience.

But until Sierra Leone and Guinea can join Liberia as Ebola-free countries, risk remains. In the Forécariah prefecture in western Guinea and in the neighboring district of Kambia in Sierra Leone, as well as in and around Sierra Leone’s capital, Freetown, a handful of cases are still reported each week. “We may have stopped the hotspots,” Bruce Aylward, who leads the WHO's Ebola response, told Nature, “but the blind spots—remote villages with little or no access to healthcare—still exist.”