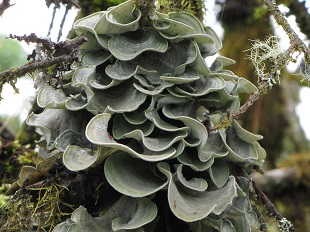 PNAS, ROBERT LUCKING A large lichen found in tropical montane forests, long believed to be one species, was last year found to contain at least 16 different fungal species. Now, scientists have revised that number to a whopping 126, according to a study published last week (June 30) in PNAS.

The lichen, Dictyonema glabratum, plays an important role in threatened ecosystems where it increases soil fertility by converting atmospheric nitrogen into forms that are easily consumed by plants. Robert Lucking from the Chicago Field Museum and his colleagues sampled nearly 400 D. glabratum from Central and South America. Subsequent genetic analyses revealed that the samples represented not 16, but at least 126 species of fungi, which are now being classified into two genera, Cora and Corella.

That number may increase to more than 400 with further studies of these lichens. “Although the number of 126 species in...

Most of these lichens “are not cryptic species,” they added. “Many are so distinctive that it is surprising that they have not been recognized before.” Although the specimens look remarkably different from one another and grow in different soils and geographies, the stark differences in color, texture or habitat may have been lost in dried herbarium samples.

“This work beautifully illustrates how little we know about the numbers of fungi on Earth,” fungal biologist Anne Pringle from Harvard University, who was not involved with the work, told National Geographic’s Not Exactly Rocket Science. “[I] wonder if local peoples knew these species already, even though they aren’t described within the formal scientific literature.”